Hi friends!  I’ve missed you!!  I hope this message finds you all enjoying your holidays thus far.  Is it just me or did anyone else LOVE Thanksgiving being so early this year?  I feel like we got a bonus week in which to work on Christmas cards, decorate the tree, make a dent in online shopping, or in my case procrastinate for 7 more days.  Either way, I am not hating it.  What I am hating, however, are all the emails advertising 20% off.  I love a good sale, but I find myself completely shutting down electronically because of the extraordinary amount of emails announcing discounts EVERY. SINGLE. DAY.  And I’m afraid if I’m not careful, I might get sucked into buying something I absolutely do not need like a Bob Ross Board Game or a unicorn planter just because it’s on sale.

Call me crazy, but I’m pretty sure the wisemen weren’t hung up on getting their Frankincense on sale.   They just brought the dang Frankincense.  (Which I guess meant the shipping was free.)

Anyway, many of you have sweetly followed my cancer journey and texted today because you remembered it was TATTOO time.  Thank you for being interested and for caring about me.  These events always feel so far away when I’m scheduling them, yet seem to surprise me when they actually arrive.

Anyway, today was the day of my highly anticipated 3D tattoo appointment, and it started out a little rough (or actually a lot rough).  I’ve been stressed lately, and any little thing has the potential to send me over the edge.  This morning, exactly that happened.  I don’t know if it was because I mixed up the lunches for my kids (God forbid) or because one of my boys hadn’t even bothered to look up from his screen to say good morning.   Either way, I snapped and the tears started to flow.  To the point where I wasn’t even thinking clearly.  I had a mini meltdown in my bathroom and was considering canceling the tattooing all together.  And quite frankly the day for that matter.  Thankfully, my friends and family knocked some sense into me and I somehow found myself in Stephanie’s car on the way to my appointment less than an hour later.

Can we take a moment and thank God for good friends & family?!  🙌🏻

Stephanie picked me up around 9:45 for a 10:30 appointment in North Plano.  I am so grateful to have a cancer buddy with which to walk through each stage.  Because we were diagnosed a mere 6 weeks apart in 2017, Stephanie and I have literally done everything cancer related together.  And tattoos were not going to be the exception.

We got to the office where we were met by Paul, one of Vinnie’s tattoo artists.  Paul explained the procedure and had me sign some paperwork.  I asked the normal questions like ‘Will it hurt?’, ‘Will I be lying down or sitting up?’ and ‘Do you ever make mistakes?’.  I had nightmares about the following scenarios in the days leading up to this appointment. 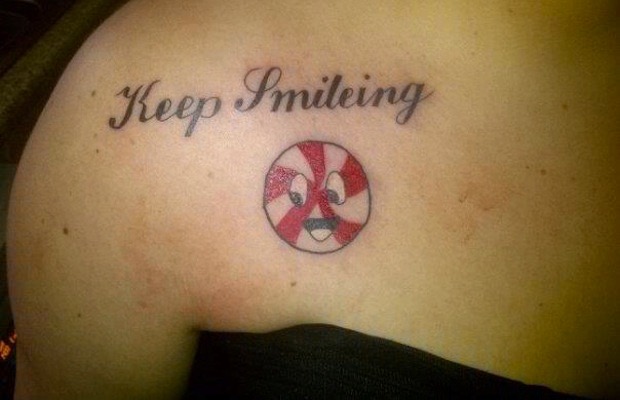 And even though in my case there is no verbiage, per se, I still imagined some awful potential outcomes should Paul make a mistake.

Once the paperwork was signed, we all made our way back to the small exam room in the doctor’s office where the tattooing would take place.  I was slightly disappointed because when one daydreams about getting a tattoo, typically the dream takes place in a hip tattoo parlor like you’d find in Deep Ellum.

In fact, there’s a certain cool factor associated with people that have tattoos.  And I didn’t appreciate that I was about to join the ranks of this club until last week when I had lunch with Amy, Angela & Jane to celebrate Angela’s birthday.  We were discussing tattoos and our waiter happened to overhear us.  I think he was slightly confused with our topic of conversation because somehow he had gotten the idea that we were lame old ladies (#partyhats #noalcohol #sharingoneplateoffajitas).

After announcing that he had 52 tattoos of his own and was about to give us advice on the process, he asked me, ‘Where on your body are you getting your tattoo?’.  I simply replied,  “I’d rather not say.”  And with that, we shut him down and Angela surmised the lame old ladies had redeemed their reputation at the birthday lunch. #don’tjudgeabookbyitspartyhat

So you can imagine, after my newfound edginess, how underwhelmed I was at the environment where my tattooing would take place.  It was literally a tiny doctor’s office with boxes of supplies in the corner, a biohazard waste disposal and a miniature sink.  I didn’t think to study the walls, but I’m pretty sure there were framed diagrams of human anatomy as well as some diplomas and awards of the physician who normally practiced there.  In other words, it did NOT look like this.

There was no swordfish.  No clay Jesus.  No celebrity candles.

But the kicker.  The REAL kicker was that there was Christmas music playing in the background.  I don’t know about you, but ‘Mary Did You Know’ wouldn’t be my first (or even my last) song choice for a playlist if I’m about to get inked (I can use cool terms like that because now I have two tattoos).

What Mary didn’t know is that getting a tattoo really hurts.

We joked about changing the station to heavy metal or something more fitting, but I guess we all just got used to it after a while and let the carols play.  It actually ended up being somewhat appropriate because Paul looks like he could be Santa’s first cousin.

And as much as I’d love to detail how everything went in that little room, in addition to showing before and after pics, I will spare you for now.  Let’s just say that I held (squeezed) Stephanie’s hand during the procedure and she cried happy tears for me when it was over (read: Santa delivered).  And for now we’ll go with “what happens in the exam room stays in the exam room”.

I was finished in a little under 2 hours, paid my bill (can I tell you what’s NOT 20% off?), and was handed a bag full of Neosporin and directions for after care.  Once we got to the elevators, my mom casually said, ‘Would you like to turn your bag around?’

Stephanie and I hadn’t bothered to even look at the bag.  But Karen (eagle eye) revealed she might not be as comfortable with announcing to the world what I had just done as Steph and I were.

I will be returning tomorrow morning with Stephanie for her procedure, where we will repeat this process.  I am grateful we know what to expect, and I look forward to being on the sidelines instead of on the field this time.

Next steps for me will be a follow up with Dr. O’Shaughnessy in late February (My appt in October was fantastic with totally normal bloodwork – Thank you Jesus!).

Thank you so much for your continued prayers & texts today.  I could not get through this without your support & God’s grace.  Each day is a gift, and I am so grateful to be where I am on this journey.  I can truly say I have NO REGERTS.

Until next time…much love to you all & make every day count!

PS: I know I’ll get asked…no, that’s not diet coke in my cup.  I am still DC free and have been for over a year and a half!  🙂  Now THAT deserves a unicorn planter, right?

“All this is for your benefit, so that the grace that is reaching more and more people may cause thanksgiving to overflow to the glory of God.”  2 Corinthians 4:15