My husband is pretty darn awesome. For my upcoming birthday, he gave me a recording session in a music studio, as he knows I love to write and sing music. A long time ago (like before kids, a husband, responsibility, a house, a dog, etc.), I actually pursued a career in music and made a demo tape called “Train of Thought”, which was recorded in Austin, Texas. (You’ll notice a Lubbock address on the tape, which was where I was attending graduate school at the time.) And to give you a real sense of how long ago that was…

For those of you born after 1987, you might not even know what this rectangular contraption is. But I assure you the cassette tape had it going on in its day. And apparently so did high waisted jeans and a sullen look on a train track.

After recording the demo, I eventually realized a life on the road would not be conducive to having a family, and that is what I wanted the most in life. So I gave up the dream of being a singer and opted for being a wife and mom instead. I figured each job was equally as glamorous anyway. Can I get an amen, moms? Moms?

Fast forward to about 2 weeks ago when I decided I’d love to take advantage of my gift before my surgery, so that I would have something to listen to leading up to the dreaded event.  Ruminating on God’s truths in scripture and in song is what gets me through each day, so when the Lord had placed it on my heart to record a hymn, that is exactly what I set out to do. I enlisted the help of my talented friend, Cary Pierce, who just so happens to be the “pierce” part of the band Jackopierce. And for all of you who graduated from high school in the late eighties and early nineties and live in the Dallas area, you need no explanation for how HIGH Jackopierce rates on the cool-o-meter. I mean, not just anyone can wear shoes like this and get away with it.

Not only did Cary hook me up to record in an ultra swanky recording studio, but he actually sang along on my track as well. Let that sink in for a minute. I got to sing with CARY PIERCE for my birthday. WHAT?! I like to think that makes me Jamieopierce – at least for a day. Cary’s voice is so unbelievably unique, and just the sound of it can make me feel like I’m 21 years old again in 2 seconds flat.

On the day we recorded, Cary and I met at the studio (do you like how I just threw that out there so casually?) and I began to watch the most beautiful process unfold. First, we had to find the right pitch. Next, the right tempo. After that came laying tracks of guitar and other instruments. Then came vocals. Cary and the producer, Aaron, were so gifted at starting from nothing and creating something amazing in just a few hours. Just like our kids do when they have school projects…oh wait.

By the end of the day, my cheeks hurt so badly from smiling the most obnoxious smile ALL DAY LONG. I had the most fun I’ve had in a long time doing what I absolutely love to do. And the best part of all? I forgot for an entire day that I had cancer. Literally.  The thing that has consumed my every thought since April 13th completely disappeared for hours. Hours. So to Trevor, I say thank you for the most amazing gift of all. And to Cary, when can I borrow those shoes?!!! 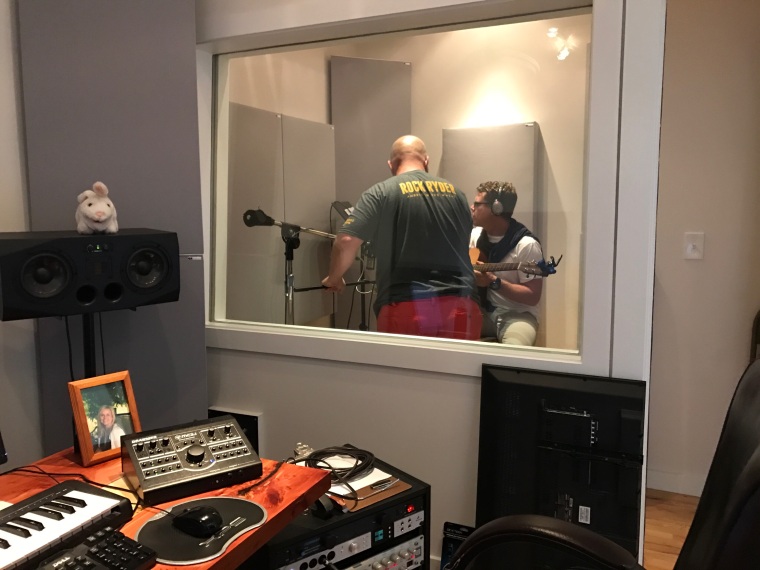 Until next time…much love to you all & make every day count. I know this one did for me.

PS: For all of those husbands who suddenly feel the need to ramp it up in the gift department, Jackopierce has an amazing Destination Show on Martha’s Vineyard July 29th and tickets are still available. They also have a family friendly Christmas show December 2nd in Dallas!! (High waisted jeans not recommended).

33 thoughts on “The Day I Forgot I Had Cancer”